It’s not often that I bother reviewing anything I’d consider a “1” since it isn’t often that I bother finishing anything so bad. Second Brain isn’t special in any way, the only reason it is an exception to this rule is because it was extremely short (aka cancelled because of how bad it was) and because it was one of the lone manga on my phone for a short while. So I ended up reading Second Brain on my phone whenever I pooped in the toilet. Interestingly, I often panicked while reading on the toilet because Second Brain was so bad that I had thought that I accidentally shat on my phone instead of the toilet and was literally reading shit. Luckily for my phone, this never ended up being the case. I checked thoroughly on multiple occasions to confirm that I was indeed reading Second Brain and not my own butt poop.

To sum it up, there’s this shit head who is emo because weird things happen around him and people think he’s a freak because of it. Because they’re right, he is a freak. Instead of taking advantage of his freak shit and becoming a sociopath overlord like most people would, he gets all depressed and says some mean things to his mom which he later regrets because she’s horribly destroyed by mind-wind. Yes, mind-wind. Mind-wind, mind-vibe, mind-tele; the entire plot of this manga centers around these incredibly stupid superpowers that everyone who was ever 12 has pretended to or imagined to have.

The plot is further mutilated by a constant change in what is supposed to be considered dangerous. In one scene a character, whose name I didn’t bother to remember, is shot with “some bullets”. While he was a superpower user, at no point in the manga are any superpower users seen to be immune to getting shot. In fact, they go through great lengths to avoid basic bodily harm. It might be understandable if the character who was shot was some bad-ass berserker who had just finished eating a bowl of dinosaurs for breakfast, but this wasn’t the case at all. The character who was shot was just a regular douche bag. Then a chapter or two later, a train full of super-jackasses is about to derail and everyone panics because the poor bastards were written by 3 collaborating sperm cells who forgot that the characters have superpowers.

“I’ve been shot in the lung and the professor is “probably” fine. Great success, team. Let’s celebrate with sarcasm.”

Also this asshole trips on her own feet while walking up a flight of stairs and requires a power user to save her from a spectacular death. 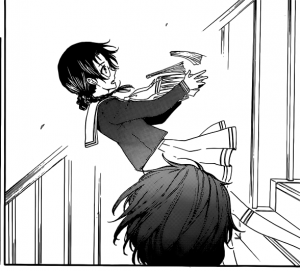 The characters have no reason to be alive. They exist in this manga for the sole purpose of the awful plot. They change their mind based on the plot, they become stronger, weaker, smarter, or dumber for the sake of the plot. It’s difficult to even point out specific parts about them that make them bad because they barely even are. They don’t think therefore they aren’t.

I have nothing good to say about this manga and would only recommend it to someone as an attempt to weaken their soul for easier siphoning. If you don’t want your soul to be weak to siphoning attempts, you shouldn’t read this ever.

The Good: –
– It’s really short (because it was awful and got cancelled)

The Bad: –
– Written by a 8-year-old
– Brainless characters (including the ones with two)
– Inconsistent sense of danger (Characters shrug off bullet wounds in one scene, then panic about train wrecks in the next)
– No ending (although this is kind of a good thing?)